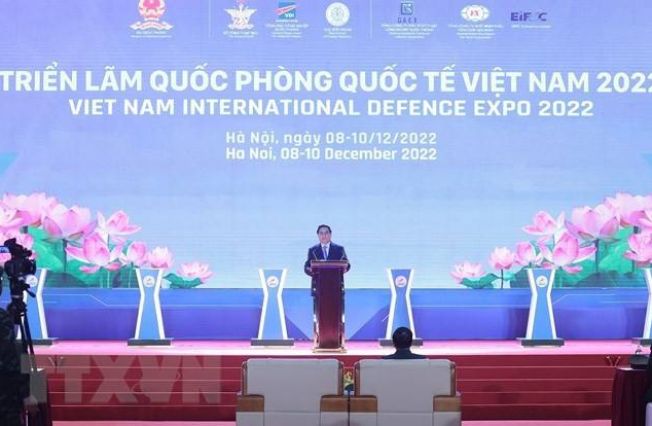 The official opening ceremony of the exhibition took place on December 8, 2022.

H.E. Mr. Vahram Kazhoyan, Ambassador of the Republic of Armenia to the Socialist Republic of Vietnam, participated in the official opening ceremony, among other high-ranking foreign officials and Ambassadors accredited to Vietnam.

The Prime Minister noted that Vietnam International Defense Expo is a good opportunity for defense policymakers and representatives of enterprises involved in the defense sector to get together and develop cooperation for establishing peace and prosperity in the world.

Mr. Pham Minh Chinh emphasized that the main priorities of the foreign policy of Vietnam, which are preservation of the fundamental principles of the United Nations, being a reliable partner for the international community, not interfering in the internal affairs of other countries, respecting the sovereignty and territorial integrity.

The Prime Minister of Vietnam also referred to the defense policy implemented by Vietnam, aimed at peace and self-defense of the people.

Mr. Chinh also added that “Vietnam International Defense Expo 2022” is a good opportunity for Vietnam to develop and promote cooperation with its partners and other countries, as well as to represent capabilities, culture of Vietnam, as well as diligence and hospitality of the people of Vietnam.

Mr. Phan Van Giang, Minister of Defense of Vietnam in his speech noted that the guiding principles of the Communist Party and the State of Vietnam is building strong defense for the protection of the motherland, national independence, sovereignty and territorial integrity.

Mr. Giang also emphasized that the goal of the People's Army of Vietnam is to promote international integration and defense cooperation with other countries, especially in the defense industry, in the spheres of the transfer of technology, military equipment and modernization of weapons, as well as exchange of experience between defense ministries and military departments of the countries in South-East Asia.

Aramazd Muradyan, Second Secretary of the Embassy of the Republic of Armenia to Vietnam, was also present at the "Vietnam International Defense Expo 2022" exhibition.