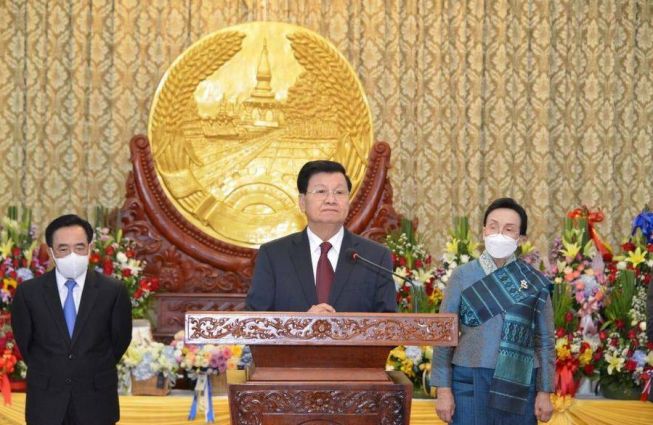 Ambassadors of countries accredited to Laos and the Permanent Representatives of International Organizations participated in the official ceremony with their spouses.

Mr. Nguyen Ba Hung, Ambassador of Vietnam to Laos, the Dean of the Diplomatic Corps in Lao PDR, delivered speech on behalf of the Diplomatic Corps. On behalf of the present Ambassadors, he congratulated President Sisoulith, the other leaders of the country and the people of the Lao People’s Democratic Republic on the occasion of the National Holiday of the country, and the coming year of 2023. He expressed confidence that the country will continue registering economic growth, thus ensuring increase in the living standards of the Lao people.

Ambassador Hung noted that Laos, like all other countries in the world, had to face COVID-19 and its related challenges, but the reform roadmap developed by the Lao government guarantees the steady revival of the country's economy, creating favorable conditions for its long-term recovery.

President of Laos, Thongloun Sisoulith, in his speech presented the country's achievements during the 47 years of its independence, referring, in particular, to the period of COVID-19 and the achievements registered in 2022. He attached great importance to the construction and exploitation of the Laos-China Railway, which has connected Laos with the main railway lines of the region, became a milestone project in the history of Laos.

President Sisoulith emphasized the most important target for Laos, which is leaving the list of the United Nations Least developed countries of the by 2026, noting that all this would not be possible to achieve and implement without the support of the international community and friendly countries. Laos will steadily continue pursuing its national policy of independence, peace, friendship and cooperation, contributing to international peace and sustainable development.

During his visit to Lao PDR, Ambassador Kazhoyan had working meetings with Mr. Saleumxay Kommasith, Deputy Prime Minister, Minister of Foreign Affairs of Laos and Mr. Mayboua Xayavong, Director General of the Department of Europe and the Americas of the Ministry of Foreign Affairs of Laos, discussing a number of issues related to the development of bilateral relations between the Republic of Armenia and the Lao People’s Democratic Republic.