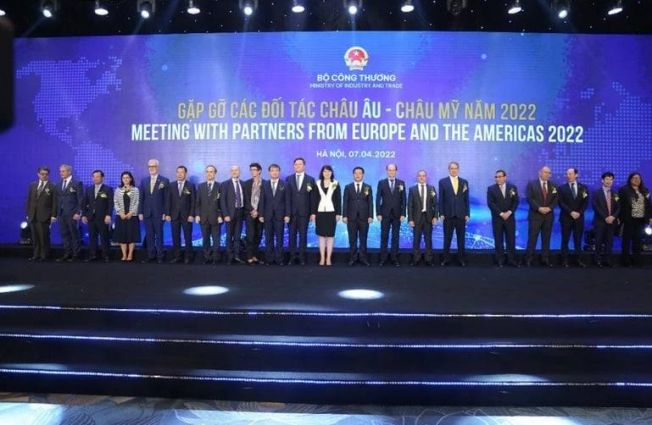 Multimedia event and presentation of the Vietnamese brands, organized by the Ministry of Industry and Trade of the Socialist Republic of Vietnam, entitled «Meeting with Partners from Europe and the Americas 2022», with the participation of the Ambassadors of the above-mentioned regions, accredited to Vietnam, took place on April 7, 2022.

The aim of the event was to express gratitude for these countries’ contribution to enhancing trade relations, as well as to encourage the further promotion of trade between Vietnam and the above-mentioned countries.

Ambassador of the Republic of Armenia Vahram Kazhoyan, among other heads of Diplomatic Missions from Europe and the Americas, accredited to the Socialist Republic of Vietnam, participated in the event.

Minister of Industry and Trade of the Socialist Republic of Vietnam Nguyen Hong Dien delivered the opening remarks. In his speech, the Minister highlighted the development and deepening of economic and trade relations of Vietnam with the partners from European and American continents.

He especially emphasized the fact that despite the difficulties caused by the pandemic, Vietnam has continued to maintain its stable position among the top twenty countries in the world in terms of economy and international trade.

The Minister noted that Vietnam will continue paying special attention to helping Vietnamese companies to overcome the difficulties caused by COVID-19, to stimulate their production, as well as import and export of goods, in particular based on digital and "smart" technologies. For the energy sector, preferences will be given to "green", clean and renewable energy sources. The importance of further development of e-commerce was also highlighted.

After the opening ceremony, a tour was organized at the pavilions of the leading Vietnamese companies who had their exhibition boots at the premises. In particular, companies in the fields of energy (gas, hydropower, wind energy), agriculture, air communication and export were presented.

Aramazd Muradyan, Second Secretary of the Embassy of the Republic of Armenia also participated in the event.