Participation of the Ambassador of the Republic of Armenia to Vietnam Vahram Kazhoyan in the conference entitled “Joining Hands for Women’s Advancement and Sustainable Development” organized by the Vietnam Women’s Union of the Communist Party. 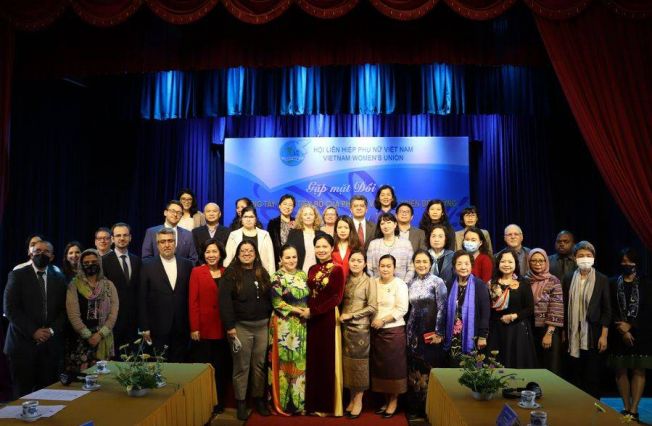 The conference entitled “Joining Hands for Women’s  Advancement and Sustainable Development” organized by the Vietnam Women’s Union of the Communist Party, with the participation of the representatives of Embassies and International Organizations that have contributed to the advancement and sustainable development of women, was held  at the Center of Vietnamese Quintessential Crafts, in Bat Trang, on April 1, 2022.

She presented the implementation of continuing reforms in Vietnam aimed at ensuring the role of women and their involvement in all areas of government. She also presented the role of women in public administration, economy, science and other spheres. Ms. Nga presented the changes stemming from the principle of equality of women, which were implemented in the Constitution of the Socialist Republic of Vietnam of 2013 and in many laws.

Among other speakers was the UN Women Representative in Vietnam, Ms. Elisa Fernandez Saenz. She noted that Vietnam has established a strong legal basis for women's equality through the adoption of Laws on Gender Equality and Prevention and control of domestic violence, protecting and assisting the victims of domestic violence. These issues are fully reflected in the National strategy of gender equality for the period 2021-2030 that was adopted last year. Vietnam's achievements are not only reflected in the commitments undertaken by the Socialist Republic of Vietnam, but as well as  in the practical efforts to increase the role of Vietnamese women in all areas, including politics.

Ambassador of the Republic of Armenia Vahram Kazhoyan spoke on behalf of the ambassadors present at the event, highly appreciating achievements of Vietnam in the advancement of women. He also referred to the Vietnam exceptional achievement in the close to complete implementation of the UN Millennium Development Goals and in the decisive steps towards the fulfillment of the Sustainable Development Goals.

After the conference, Ambassador Kazhoyan had a meeting with the President of the Vietnam Women's Union, Ms. Ha Thi Nga. An agreement was reached to intensify the ties between the Union and the Embassy, aiming to further develop the ties and cooperation between the women of Armenia and Vietnam, that would include various spheres of activity.