Interview of the Ambassador of the Republic of Armenia Vahram Kazhoyan on the occasion of the Lunar New Year and the 30th anniversary of the establishment of diplomatic relations between Armenia and Vietnam. 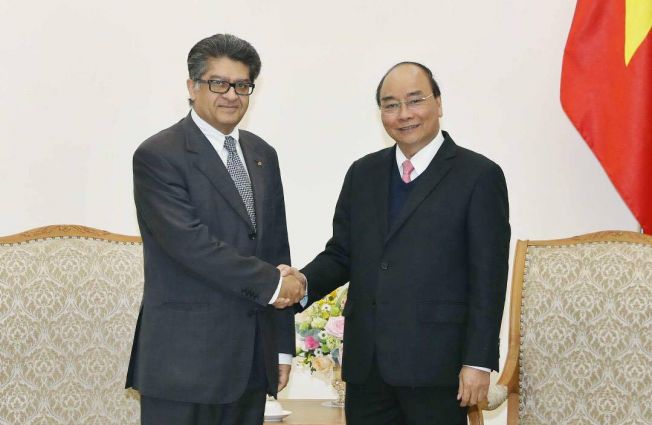 (CPV) - Vietnam and Armenia have established diplomatic relations for nearly 30 years and the two countries have many potential to promote the trade cooperation. On the occasion of the Lunar New Year Festival of the Tiger, the Communist Party of Vietnam Online Newspaper reporter has an interview with Armenian Ambassador to Vietnam Vahram Kazhoyan about the relations between the two countries.

Ambassador Vahram Kazhoyan: Thank you for this opportunity to address to the people through your publication. Using this opportunity, I would first of all like to extend my warmest congratulations to the people of Vietnam on the occasion of the Lunar New Year and wish them power and strength, the symbols of the Tiger, during the year of 2022. I also wish the people of Vietnam strong health, and determination to fully overcome the COVID-19 pandemic.

Armenian-Vietnamese relations have been tested through time. We have had a number of official visits of delegations since the early days of the establishment of diplomatic relations.

Likewise, the following Vietnamese delegations have visited Armenia: Minister of Justice of the Socialist Republic of Vietnam Mr. Ha Hung Cuong, October, 2015; Deputy Prime Minister and Minister of Foreign Affairs of the Socialist Republic of Vietnam Mr. Pham Binh Minh, for the participation in the 17th Summit of the Organization of La Francophonie, October, 2018; Head of the Commission for External Relations of the Central Committee of the Communist Party of Vietnam (CPV) Mr. Hoang Binh Quan, for participation in the International Conference of the Political Parties of Asia-Europe Cooperation, April, 2019; Parliamentary Delegation headed by the Vice-Chairman of the Foreign Affairs Committee of the National Assembly, Chairman of the Vietnam-Armenia Friendship Group of the Parliament of the Socialist Republic of Vietnam Nguyen Manh Tien, June, 2019.

In addition to these bilateral agreements and Memoranda of Understanding, Armenia and Vietnam have cooperated in the framework of the Free Trade Agreement between Vietnam and Eurasian Economic Union since 2016.

A new important page in Armenian-Vietnamese bilateral relations was started with the opening of the Armenian Embassy in Hanoi in 2013. It enabled us to work more closely with the Government of the Socialist Republic of Vietnam, towards the implementation of our mutual goals.

We believe that our two peoples need to know each other better, and the best means to do that is through cultural and tourist exchanges. Accordingly, Armenian side is currently looking into the possibilities of easing the visa requirements for tourists from Armenia and Vietnam, traveling to discover our countries beautiful sites, mountains, seashores and the cultural heritage.

Deepening and expanding the legal basis in the spheres representing mutual interest also can give new impetus to the further development of bilateral relations between Armenia and Vietnam.

Ambassador Vahram Kazhoyan: As mentioned earlier our friendly countries have excellent political relations. However, the same cannot be stated for our trade-economic relations. The trade volumes are not satisfactory.

These numbers are very low compared to the potential that our countries have and the interest that the businessmen in both countries express towards import and export of goods in both directions.

Armenian brandy Ararat and our wines have been recognized as winners in different international fairs and competitions, winning Grand Prizes and gold medals.

At the same time Armenia is interested in importing coffee, fruits, textile, leather goods, electronics, including computers and accessories and parts, etc.

Reporter: Despite world trade uncertainty and the COVID-19 pandemic, two-way trade turnover between Vietnam – Armenia still registered impressive growth in the first 9 months of 2021, the registered capital reached 7.8 million USD, up 7 times over the same period in 2020. Could you please give your assessment about this result?

Ambassador Vahram Kazhoyan: The COVID-19 pandemic was a new challenge to the world and not only one for the medical-scientific world but also to the economies of countries. It hit very hard to the airline, travel and tourism industries, the production of a number of goods, the factories of which had to be shut down. After the heavy blow that many economies suffered in 2020, the first year of the pandemic, and in order to recover from this “new normal”, 2021 required multiple adjustments by the respective governments to be able to come out of standstill and to reboot their economies.

As a consequence, 2021 registered a breakthrough in two directions – the world was striking back with several vaccines that were successfully fighting the virus, and simultaneously recovering the economy from the slump of 2020. In the same way both Armenia and Vietnam recovered from the initial year of COVID-19 pandemic through reforms aimed at improving financial inclusion, social cohesion and greater environmental resilience.

Unfortunately, many of the agreements that our Embassy had reached with the Armenian and Vietnamese counterparts in 2019 and the beginning of 2020 were not implemented during the last two years. We are currently back to those discussions and are optimistic to be able to fulfill them in 2022.

Reporter: Could you please share the organizational plan of the postponed Second Meeting of the Intergovernmental Commission between Vietnam - Armenia on economic, trade and scientific and technical cooperation in 2022?

Ambassador Vahram Kazhoyan: The Second Meeting of the Armenia-Vietnam Intergovernmental Commission was planned to take place in October, 2019 in Yerevan, Armenia. The agreement to hold the Second Meeting of the Intergovernmental Commission, accompanied with the Business forum with participation of Armenian and Vietnamese businessmen and entrepreneurs was reached between the Prime Ministers of our two countries during the visit of the Armenian Prime Minister Nikol Pashinyan to Vietnam in July 2019.

Currently we are discussing with the Ministry of Industry and Trade of Vietnam the holding of the Second Meeting of the Armenia-Vietnam Intergovernmental Commission in Autumn (October-November) of 2022, in Yerevan. There is an overall understanding of the importance of this meeting that would serve to many aspects of cooperation between Armenia and Vietnam.

Armenian embassy in Hanoi is the focal point between the Ministry of Economy of Armenia and the Ministry of Industry and trade of Vietnam and will do everything in order for this important Meeting and the Business Forum become a reality. We have much organizational activities ahead of us during the first three quarters of 2022.

Reporter: Vietnam has successfully completed its role as non-permanent member of United Nations Security Council in the term of 2020 – 2021 tenure. What are your assessments of its role?

Ambassador Vahram Kazhoyan: To fully describe Vietnam's successful tenure in the United Nations Security Council, one has to look back at how the country was elected to that important world body: Vietnam won the election to become a non-permanent member of the UNSC for 2020-2021 after receiving 192 votes from the 193 members of the UN General Assembly. This was an unprecedented support to the Vietnam's candidature

Truly, Vietnam had a very successful tenure as a non-permanent member of the United Nations Security Council for 2020-2021, in a very difficult period for the world and the UNSC in particular due to complicated, uncertain and a number of unprecedented developments in the world.

Vietnam promoted its proactive role and participated in the common work of the UNSC in the spirit of independence, self-determination, responsibility and balance, effectively and substantively contributing to negotiation activities, seeking solutions, and meeting the common concerns of the international community. Thus, Vietnam played an even important role in the UN, especially UN Security Council activities.

Reporter: As an Ambassador, what do you wish to contribute to promoting bilateral relations between the two countries in the future?

Ambassador Vahram Kazhoyan: It wouldn't be an exaggeration to say that in my capacity as the Ambassador of Armenia to Vietnam, I understand probably best of all the history, present day and the future of the relations of our countries. Living in Vietnam and getting to know this beautiful country and its honest, proud, hardworking and intelligent people, I can say that our countries and nations have much in common. It is not surprising that one of the famous quotes of President Ho Chi Minh – “Nothing is more precious than Independence and Liberty” can be equally attributed to Armenia and the Armenia people.

We have had difficulties in our history but we always rise as the Phoenix and rebuild our country. We have succeeded also thanks to our mutual support in the times of need.

I could deliberate for hours about this question; there certainly are many things that I would like to see happening in bilateral relations between our two countries but there are no obstacles and this work is carried out systematically and with devotion by our Governments. Here, I would also like to mention the important and valuable work of the Vietnamese Union of Friendship Associations, headed by a good friend, Ambassador Nguyen Phuong Nga and the Vietnamese-Armenian Friendship Association, headed by a good friend Mr. Nguyen Van Thuan.

However, if I had to highlight only two specific issues that would highly contribute to the promotion of bilateral relations between the two countries in the future – I would say the opening of the Embassy of Vietnam in Yerevan and the opening of direct flights between Hanoi and Yerevan.

Reporter: Thank you so much!