Meeting between the Ambassador of the Republic of Armenia to the Socialist Republic of Vietnam Vahram Kazhoyan and Professor Jean-Marc Lavest, Principal Rector of the University of Science and Technology of Hanoi (USTH) 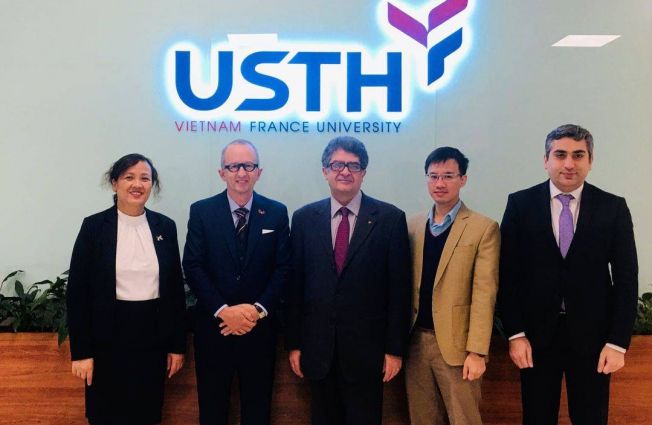 Ambassador of the Republic of Armenia to the Socialist Republic of Vietnam Vahram Kazhoyan had a meeting with Professor Jean-Marc Lavest, Principal Rector of the University of Science and Technology of Hanoi (USTH), on November 23, 2021.

During the meeting, Professor Jean-Marc Lavest, who earlier has headed the French University of Armenia for many years, presented the activities of the USTH, as well as the bachelor's, master's and postgraduate programs provided by the University in the fields of ICT, Life Sciences, Applied Environmental Studies, Aeronauticals maintenance and Engineering operations, Space Science and Satelite Technology, Energy, Fundamental and Applied sciences, Advanced Materials and Nanotechnology.

During the meeting, the parties discussed the possibilities of concluding memoranda of understanding between the University of Science and Technology of Hanoi and the Universities of Armenia, as well as the prospects of cooperation between them.

The issues of providing scholarships to Armenian citizens to study at USTH, exchange program for the lecturers, as well as the opening of the Armenian TUMO branch in Hanoi were also discussed during the meeting.

A short tour was organized on the premisses of the university by the Principal Rector who also presented the new project of construction of the new University complex.

The parties agreed to follow up on the meeting, in order to pursue the implementation of the discussed issues.