Participation of the Ambassador of the Republic of Armenia to Vietnam Vahram Kazhoyan in the presentation of the Universal Periodic Review first voluntary mid-term report of the Socialist Republic of Vietnam. 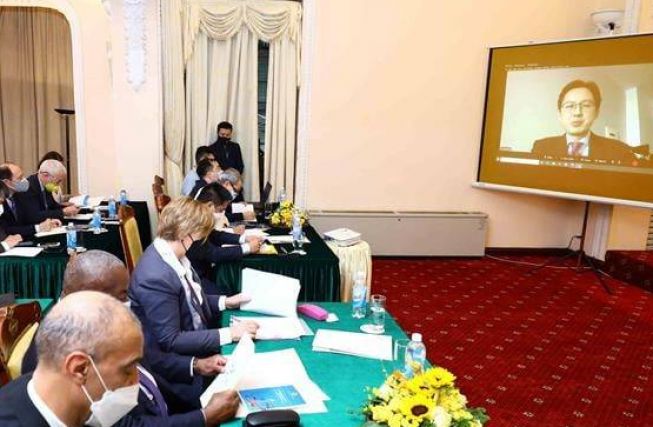 The presentation of the Universal Periodic Review first voluntary mid-term report of the Socialist Republic of Vietnam took place at the Vietnam Governmental guest house on March 31, 2022.

Ambassador of the Republic of Armenia to the Socialist Republic of Vietnam Vahram Kazhoyan, participated, among other Ambassadors and Heads of Permanent representatives of international organizations accredited in Vietnam participated in the event. The meeting participation was both onsite and online.

Assistant Minister of Vietnam, Director-General of the Department of International Organizations, Mr. Do Hung Viet delivered welcoming and opening remarks. He informed that the mid-term report was approved by the Prime Minister of the Socialist Republic of Vietnam Pham Minh Chinh on March 22. It was prepared with the involvement of all 18 ministries and almost 70 other structures of the Socialist Republic of Vietnam.

UN Resident Coordinator a.i. Ms. Rana Flowers in her speech highly praised the decision of the Government of the Socialist Republic of Vietnam to present the voluntary mid-term report.

Next speaker, Deputy Director-General of the Department of International Organizations of the Ministry of Foreign Affairs of Vietnam, Mr. Nguyen Hai Luu presented in full details the fulfillment of the recommendations accepted by Vietnam for its Universal Periodic Review third cycle report.

He also informed about Vietnam’s progress in the field of human rights, particularly in the areas of poverty reduction, education and health. The Ministry of Education and Training of the Socialist Republic of Vietnam has approved and included the subject of human rights in the educational programs of secondary and higher educational institutions of the country, since 2017.

The presentations were followed with question-and-answer session and discussion.

During the discussion, Ambassador Kazhoyan made comments, welcoming Vietnam’s initiative to present its first voluntary mid-term report, in the framework of the Universal Periodic Review. Ambassador Kazhoyan presented the experience of Armenia in the framework of the UPR, referring to the three UPR reports, as well as two voluntary interim reports already presented by Armenia, and the third one to be presented in the autumn of 2022. Mr. Kazhoyan also noted that Armenia highly appreciates the perfect and continuous implementation of the recommendations presented by Armenia to Vietnam, ”to continue steps towards women’s empowerment and guaranteeing equal opportunities”.

The second part of the meeting was dedicated to Vietnam's candidacy to the UN Human Rights Council, for 2023-2025 term.

Assistant Minister of Vietnam, Director-General of the Department of International Organizations, Mr. Do Hung Viet delivered a speech where he presented in details achievements of Vietnam in the field of human rights, informing that the said candidature  has been endorsed by the ASEAN states and called upon the countries to support   Vietnam’s candidature.